This Christmas, we’re encouraging families to think about what the next 12 months could bring if they give their child a My Gator Watch. We want to encourage our kids to pursue their passions and develop skills away from devices. We want them to think bigger! With this in mind we would like to shout about some of our amazing Gator Club ambassadors. First up is Tia Murrell, a west end star at the young age of 10!

Earlier on in the year we met up with the super talented and very funny sisters, Tia and Kizzy Murrell, to talk about Tia’s role as the young Nala in the West End Musical, the Lion King. As well as chatting all things musical theatre we got a wonderful insight from Mum, Pippa, into the juggle involved in supporting her talented children in pursuing their goals; whilst keeping on top of school, homework, full time work as a teaching assistant and four stage performances a week. Phew! We’re exhausted just thinking about it.

Luckily for the girls, Pippa has a background in theatre and stage management, as does Dad, Chris, so they both knew from when the girls were very little that they’d like to give them the opportunity to see if it was for them. At 2.5 years old both girls were introduced to dance, specifically Jazz and lyrical through Dance Direction where everyone realised they had a natural talent and love for movement.

Fast- forward to today, Tia at just 10 years old, has been performing in the Lion King for a year. Tia is present at The Lyceum theatre four times a week – twice she’s performing and twice as the understudy to the other team of performers. In order to do this she misses just one afternoon of school a week on a Wednesday, which is her matinee performance.

We got stuck into logistics and found their schedule is pretty impressive. For an evening performance Pippa or Chris take the train from their homes in Teddington to the West End with sister, Kizzy in tow. They drop Tia off and then promptly get the train back home to collect the car to then go and collect Tia at 9:30pm, or if it’s a weekend performance, 10:30pm. Kizzy, Tia’s super lovely 8-year-old sister takes this all in her stride. Mum or Dad often has to carry her in asleep to collect and then bundle her back in the car – still asleep – they both giggle very infectiously that Kizzy doesn’t remember this in the morning. What a top sister she is!

Performing in the musical has opened a whole new world to both sisters. Which includes the occasional grown up dinners at Browns and a new theatre family. Kizzy is already insistent that she’s going to be auditioning for the musical herself in the near future. All this started from a flyer the girls picked up at West End Live and some encouragement to give it a go. The girls are very lucky to have a wonderful extended family, which includes an older half brother and sister. Recently, a memory very special to both of them was meeting up with their brother, Travelle, who they hadn’t seen for four years, when he came into London with sister Kyra to see Tia perform. The most magical moment for both girls.

All this means the girls really don’t have much time to be on the Internet, games or social media which Pippa is happy about. She does however take a pragmatic view of how they should spend the downtime, as a teacher herself, she knows how full on the school day is so is very happy for them to come home from school and listen to music on their iPods. The girls are clearly into their music. Tia is a huge fan of Bruno Mars – who she says is confident, encourages you to be yourself and ‘go full out!’. Kizzy on the other hand loves Miranda Hart and has aspirations to be a comedian one day. The girls complement each other well and have a lovely, supportive bond.

When we asked the girls what was the best thing about being a kid, Tia was quick to say ‘you don’t have to worry about what other people think’, she’s a confident girl who’s clearly developed emotional intelligence beyond her years. Kizzy piped up with ‘free train tickets’. We couldn’t agree more. The World, or at least London is her oyster.

As a founding member of the Gator Club, Tia has enjoyed getting to grips with her Gator Watch and says it’s pretty handy ‘as you can call Mum if something bad happens’. The girls also live apart from their Dad so everyone thinks it’s great for a quick good night when they are staying away or to check in with grandparents. Given Tia’s increasing independence it’s reassuring for Mum and Dad to know she can contact them if needs be without the worry of giving her a smartphone and the inevitable access to social media and the Internet that they allow. 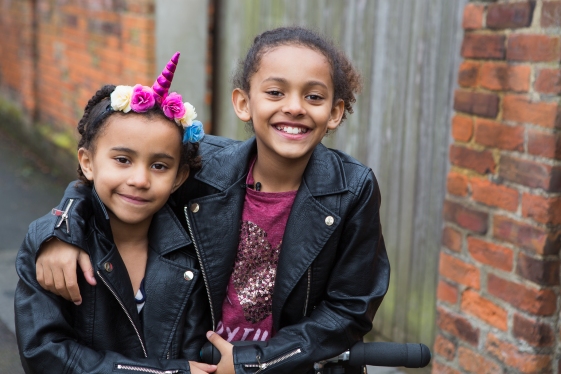 Both girls are clearly sparky, full of life and feel wonderfully grateful for opportunity being part of the musical has afforded. There’s no doubt that Tia is a smart girl with a bright future ahead of her. She’s motivated to get her homework done and has a particular passion for science – Mum says her most recent Google searches include ‘how do you make slime…’ Grounded too!

We are delighted to have Tia in the Gator club and wish these super girls every success with the exciting journey they have ahead of them.

My Gator Watch is a wearable mobile phone designed especially for 5-12-year-olds. It uses GPS, two-way calling, works across multiple networks and has an SOS feature for peace of mind. It does not have a messaging feature and you, the parent; determine all numbers that are pre-set within the phone.